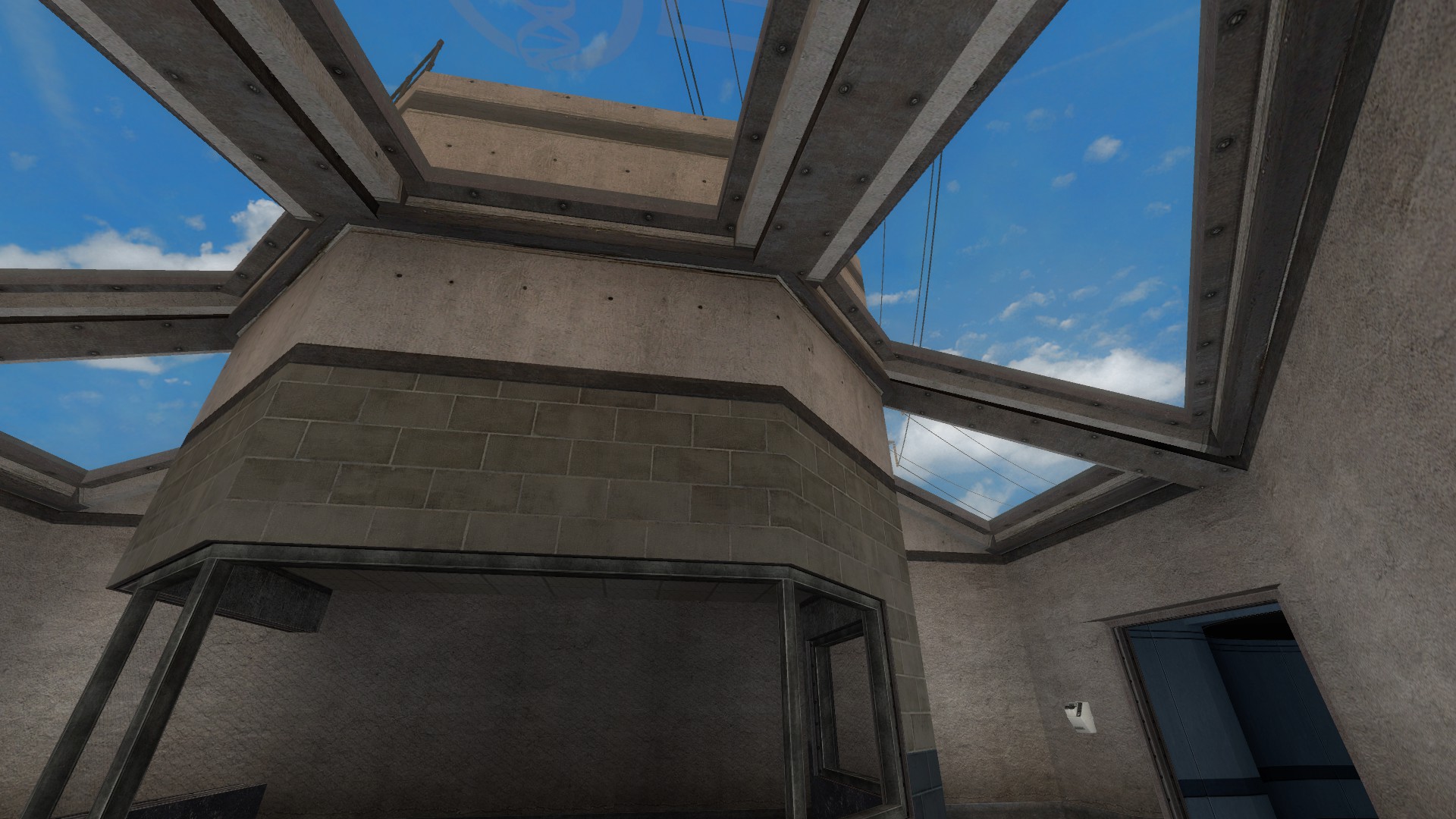 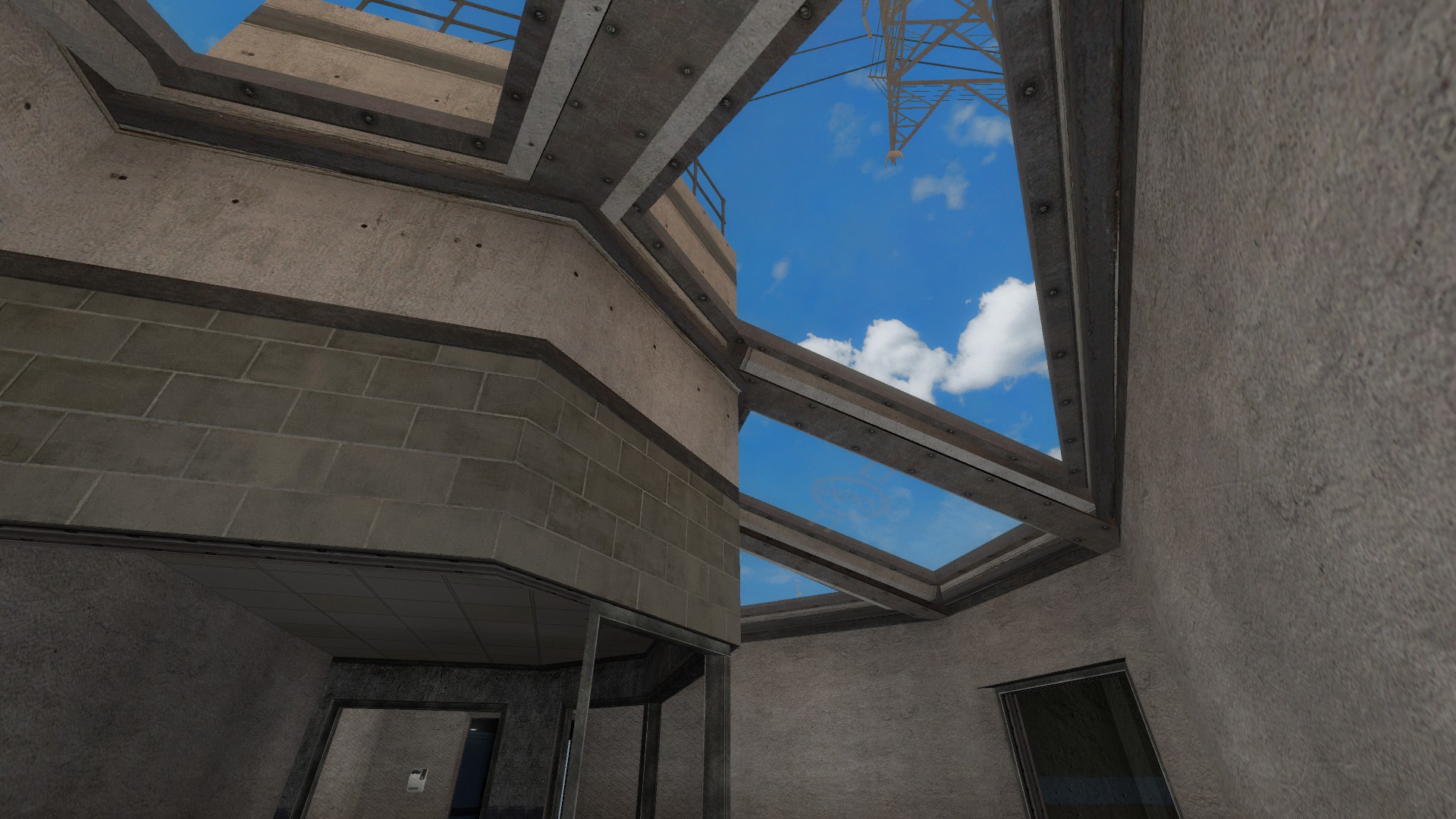 D65F756E9DC4415BF445B9B282D93886A62F271D1920×1080
Originally, I didn’t want to make this area at all (instead the hallway that leads to it would just go directly to the decontamination room), or at least wanted to radically change it up from my original design and make it much smaller, drabber, and less elaborate. The skylights were actually the very first thing I thought of including here and I kind of designed the rest of the room to be amenable to them, but at the same time I was kind of afraid of them and was worried they would ruin the area. You see, one of the things that I see occasionally in Black Mesa maps that I don’t like is people making the facility too much like a shopping mall or hotel, with a lot of fancy architectural flourishes and creature comforts that a US government laboratory would be very unlikely to possess, and I thought the big glass skylights would have that effect. However, the combination of the big metal beams supporting the skylights, the bare concrete walls, and the cinderblock guard station taking up most of the center of the room make the spotlights much less comfortable and more like something you’d find in a military base or high-security prison, which is exactly what I wanted for the high-security biodome. So I am immensely proud of the skylights and glad I included them.

As part of that very gritty, ultra-secure institutional aesthetic I was thinking of including some HECU soldiers throughout QEPD in place of security guards. The only problem is that while I can fairly easily make them be friendly towards the player and scientists, they have no pre-disaster dialogue and very few ‘working’ or ‘casual’ animations so there isn’t much they can actually do.

Had a bit of a breakthrough in how to design the new ‘I Map’ covering Lab C; my primary focus at the moment is on redoing Map F with some additional entity logic, documents, and other fun stuff, but once that’s done I am planning to release at least part of Map I along with a remastered administration and personnel section:

I’ve had a bit of a screwup and lost a lot of files, with little hope of recovery. Unfortunately a lot of the pre-disaster maps were among them and I will have to be restoring assets from my own Workshop submissions which range from somewhat to extremely out of date. Unfortunately this means that a lot of the new stuff I was planning to add to Questionable Ethics is now going to be delayed for months or possibly more; I just don’t feel up to immediately remaking all of it right now. Instead, I think I’ll go back to the long-neglected Office Complex maps and see what I can do there.

I think the reason the radioactive stuff in black mesa is bright green is marker chemicals. So it makes some sense.

Due to glitchy bullshit I’m running into serious difficulties with Office Complex and have decided to take a break to refocus on Questionable Ethics; coming back to the tram station in Map H I’ve had a bit of a brainwave that the very long slanted section coming off of the central platform looks really silly, and with that in mind I’ve shortened it and moved the lower floor up. This freed up a lot of space to put in new rail elements, and the area is finally shaping up to be the big transit interchange I had originally envisioned:

I even have a rough prototype of the turntable done, although I’m not super happy with it and might redesign the outer layer in an octagonal shape:

I am not sure which of the OAR-style tracks exiting this map leads to Apprehension, or if that’s even where they go at all, although we can decide that in more detail as AMPD grows.

0370B44FEDF02B752F544A8702DAD7BC63BDC9B9.jpeg1920×1080 521 KB
One other area of interest is this big flat wall segment overlooking the track system. I was thinking maybe a mid-sized control room could go here seeing as the track interchange probably needs a fair bit of oversight in order to run effectively, and that in turn got me thinking… could this actually be the area from the start of Welcome to Black Mesa in Opposing Force where the first Race-X-ian soldier is introduced??
Pauolo April 12, 2019, 4:12pm #74

Honestly, this place looks like a traffic nightmare in the making.

Imagine that a suspended tram car gets stuck above the ground tracks, or even falls on it.

Definitely reason to believe that the OP4 platform was intended for the biodome, despite no signage indicating it as such the textures do look awfully similar.

However that doesn’t necessarily mean that this one has to be that platform in particular- if we’re going off that one transit system map there’s at least 2 stops, one of which I’m assuming is either closer to the Advanced Bio labs or near the biodomes themselves (which are presumably a few floors down). Could reasonably be assumed that the OP4 platform is the second one, even though you can’t necessarily tell what’s where judging by the map alone.

Personally, I’d choose to keep building what you got going here, and keep the OP4 platform separate. Admittedly, they’ll probably both bear a rather strong resemblance to each other, buuut like I said that’s just my two cents.

I was actually thinking that the platform in OP4 wouldn’t be the Biodome one the control room overlooks, but rather it would be further down one of the tunnels (possibly part of Bounce or Residue Processing); you would just travel a little longer to get to the control room from it.

So, the rail platform for Questionable Ethics is out, in fact it’s been out for a while now and I just forgot I’d never mentioned that fact until recently. My original plan was to then go back and add a connection for the rail system at the PD Anomalous Materials platform, but while the rail station logic itself is functioning perfectly everything else is completely borked due to engine changes and as a result I have been making extremely little headway in that area. I have been making great progress in Office Complex and the interior of Questionable Ethics, however, so it is entirely possible you will see progress there well before AM is connected to the rail system.

I’m interested on how you plan to extend QE’s rail system before it merges with APP, OaR, and what else. Because all the rails go in one direction only, the only way to get back to a previous chapter would to backtrack in reverse (fun), or to create one (or multiple) giant loop/s. I feel like there has to be some additional turn-table junctions behind closed doors to redirect the train to new loops that head back to the start/mid of PU to APP journey.

Or should we just not bother with back tracking?

Noticing that seemingly all of the OAR tracks are only in one direction I sort of figured that they are either going to need to reverse or make one big loop.

The rebuilding of parts of “Map I” that were lost when I moved computers is going extremely well: 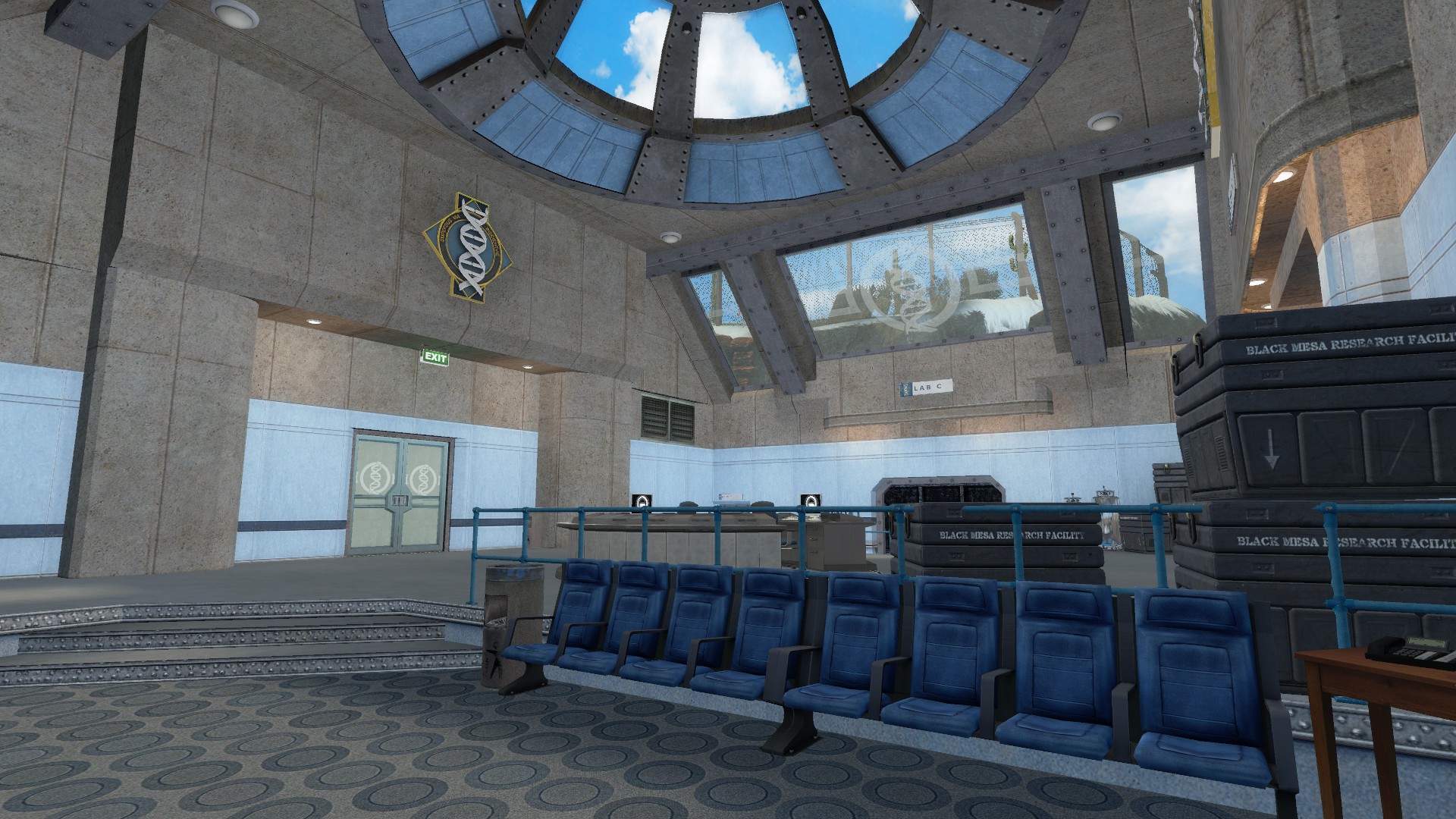 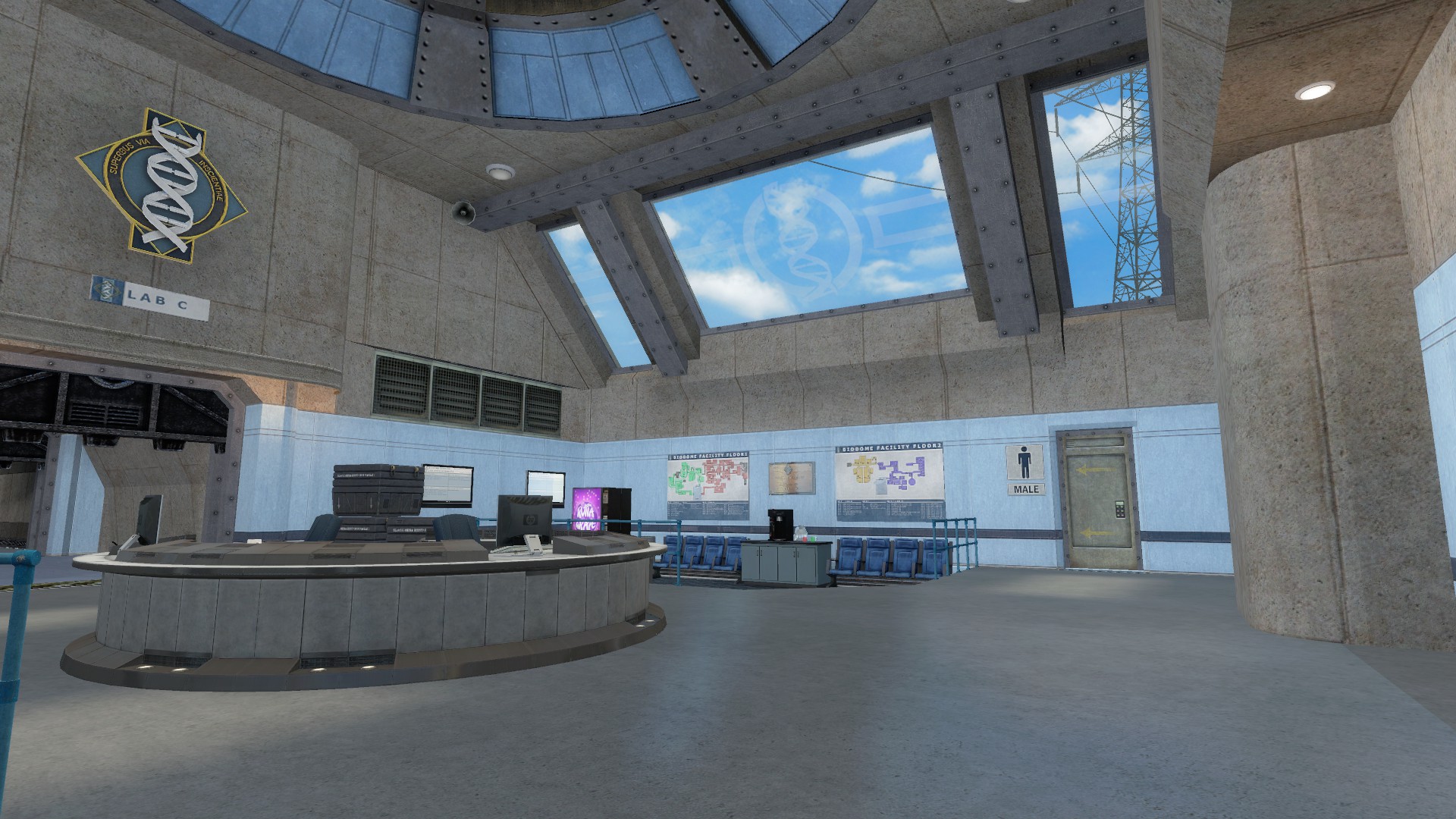 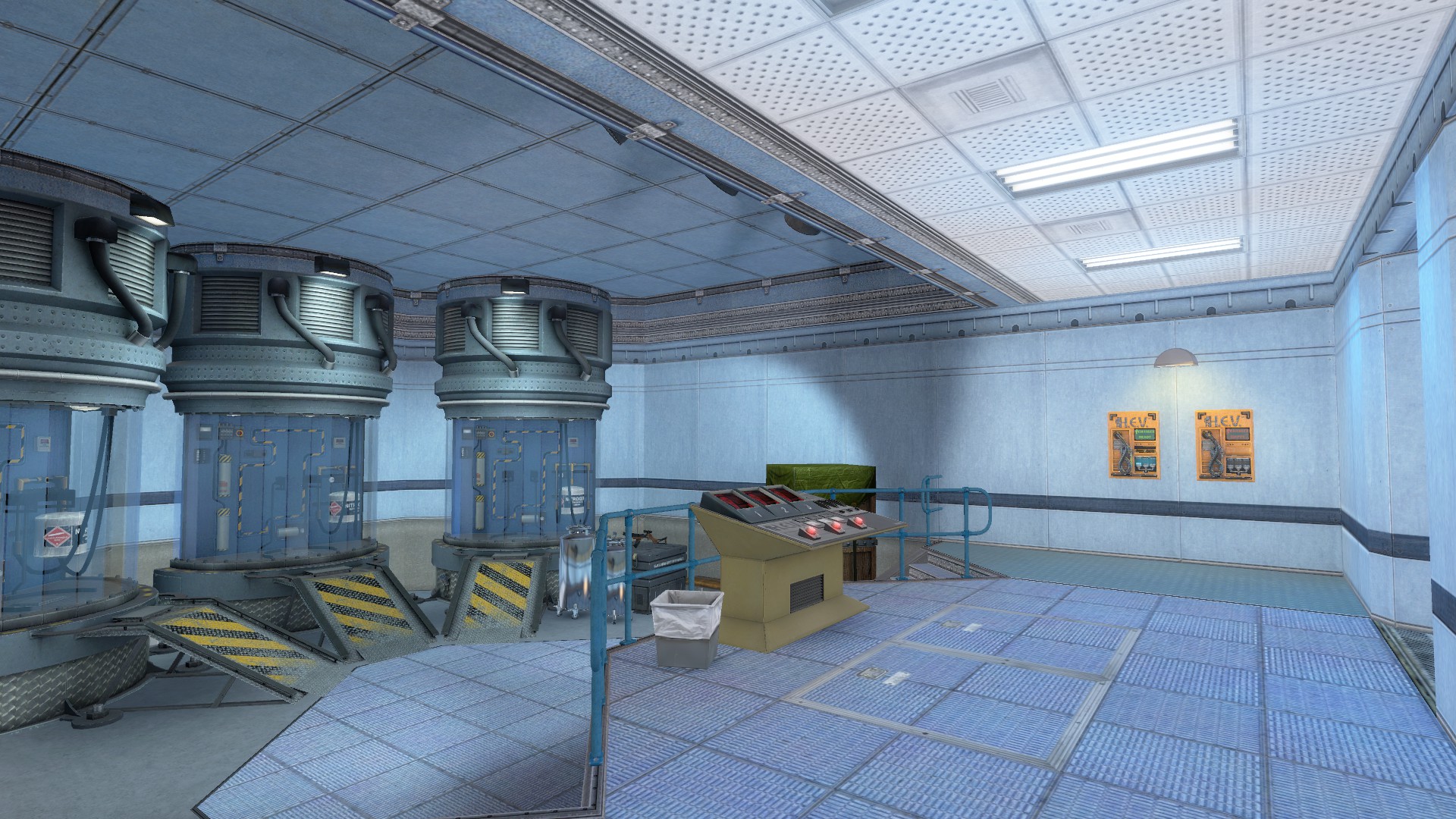 However, I’ve run into a bit of a problem going deeper into the labs. Those areas are supposed to be very similar to the laser labs also on the second floor of the QE complex, which canonically are lit with yellow-orange lights. I try to keep the general colors of the lights in pre-disaster maps the same as they were beforehand, but these areas look much better lit with blue lights instead of orange: 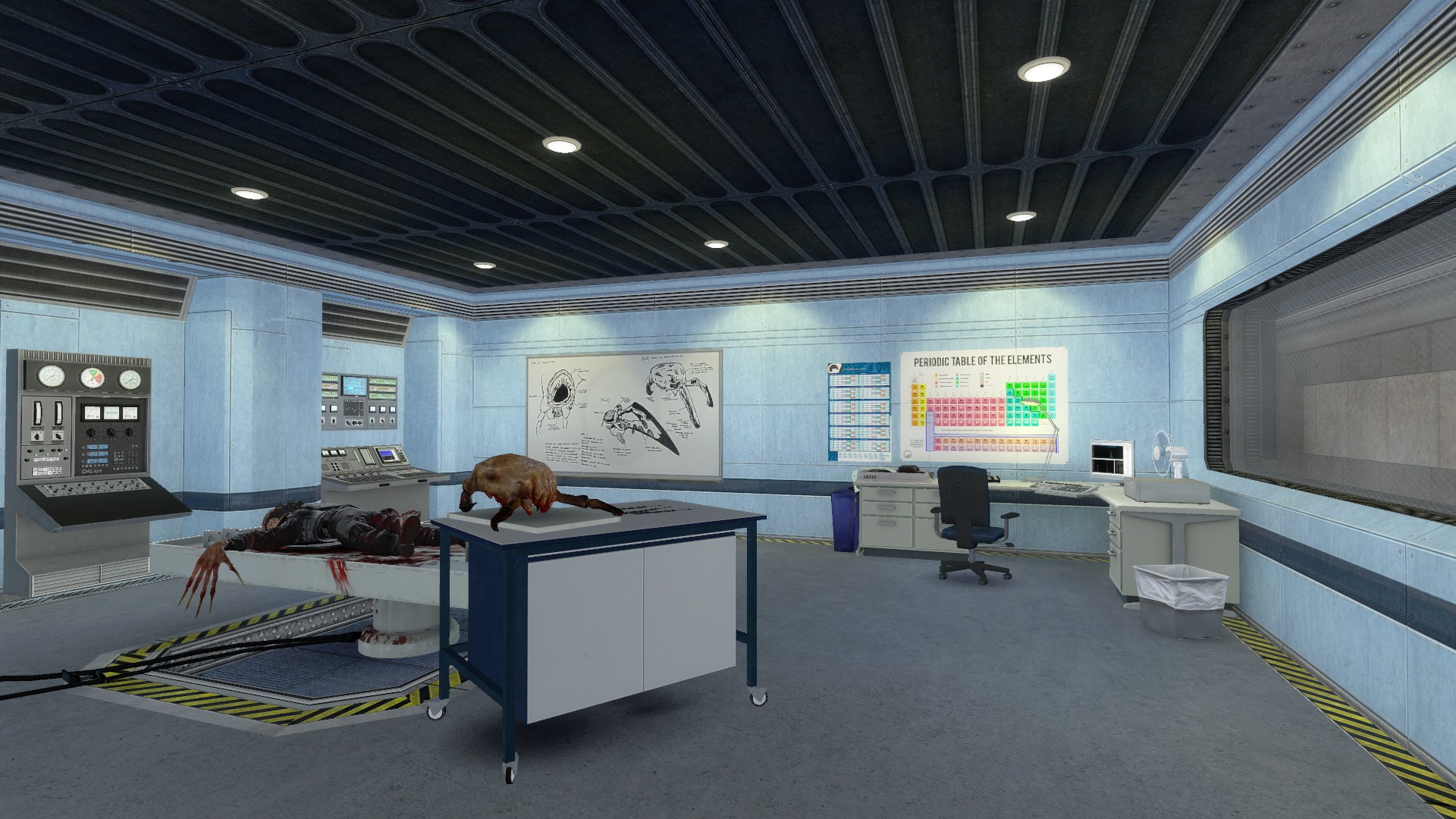 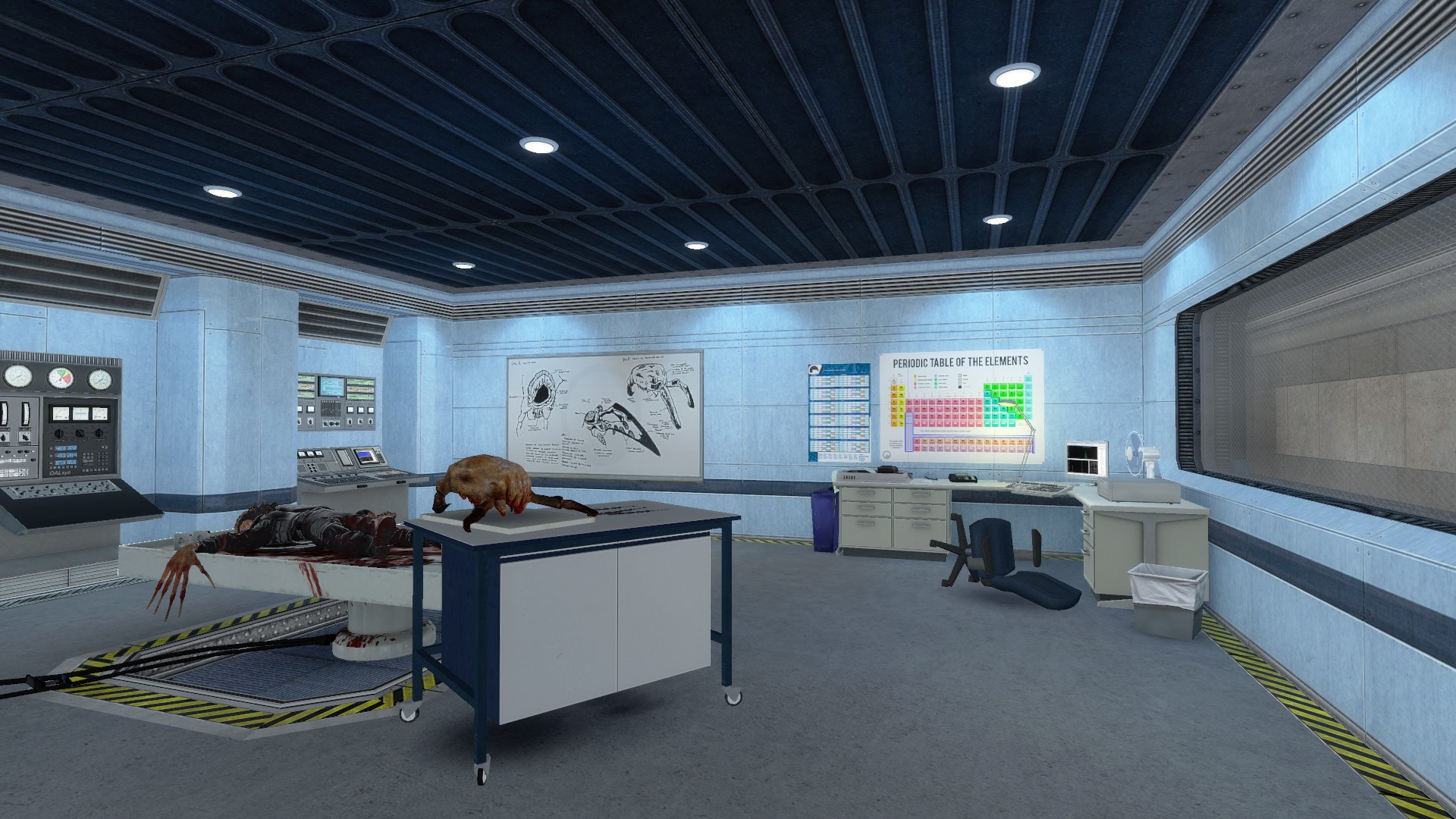 I honestly cannot tell the difference.

Scientists experiment, it’s what they do.

I would go with the blue lights. It looks better and I don’t think anyone notice the difference.

20190502125838_1.jpg1280×600 113 KB
Its been a while, things do get the better of me. But going through the maps, I noticed 2 things I can report. The first one is that the airlock from the tram station to the upper levels of the lobby don’t connect yet, Idk if this is intentional or not, or if a means of connectivity hasn’t been found yet, but I thought I would bring it up. the other issue is while in the lobby part of the map, the screens for the main entrance to the lower lobby vanish, this is for both sides of the airlock.
next page →