Can you identify this symbol?

I have looked quite a bit, but I have not been able to find out what this symbol means, does anyone know?

Something, something Illuminati confirmed.

About seven? What context would it be used in? 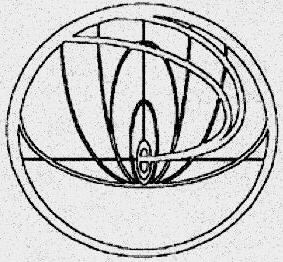 This looks similar to the symbols used to identify various unit types on military charts and war games- sadly, I don’t know what this specific one corresponds to or what that system of symbols is even called, but IIRC symbols with dots on the bottom typically represent some kind of tank unit.

Truthfully, I don’t know the meaning. I have not seen it before. But from what I know of modern symbolism:

Thank you very much for your input guys!

A couple of places actually, one in game, can be found on the side of a Tank, along with another symbol with 88 above a V. Usually this can indicate what platoon a vehicle is assigned to, but with the 88V, I felt like maybe it could be pointing to something else. I have also seen it as a logo in Destiny 2. Those symbols side by side just seem weird. I’ve been around a lot of tanks and military vehicles, usually it may have a company identifier, Aco Bco etc, if its a unit, it would usually list battalion and division, possibly brigade. The 88V though is just odd. I was hoping it might have been some type of indicator of how to align text or numbers, Maybe something like 3 combined into one, followed by 8 and 8 combined into 1. But, again, nothing seems to pan out.

After seeing it in Destiny 2, I assumed it must have some type of meaning. I have been unable to find a meaning for it anywhere.

Oh, well in that context it’s less likely to mean a concept and more likely to indicate something on (or something about) the vehicle. It may be visible to other company members to indicate the tank’s role, or it may aid an optical recognition system to prevent friendly fire… heck, anything, really. The asset designer was likely influenced by symbols on modern tanks, for instance this V on an Abrams: https://commons.wikimedia.org/wiki/File:M1_strategic_mobility.jpg or this > on another Abrams: http://www.fprado.com/armorsite/Abrams_Pics/M1A1-Abrams-USMC-01.jpg

I’m not a tanker, so I have no idea what those decals are supposed to mean, but they must have some purpose, and they were given a sci-fi makeover for the assets you see.

I can, however, speak about decals on submarines. There are numbers on the side to monitor the waterline / draft, there are arrows to indicate where tugboats can push without causing damage,
and then sometimes there’s fancy shit on the top that I do not understand, but it looks awfully technical: https://s3.amazonaws.com/idme-wordpress-military/wp-content/uploads/2015/10/06092605/nssn-02.jpg

Right click “Search Google for this image” and I got this
https://en.wikipedia.org/wiki/John_Titor